Gather Allies And Step Into The Firelands In WOW, Taking On Lord Ragnaros This Week

From December 10 to 17, you and your staunchest allies are invited to the Firelands raid dungeon to take on the elemental lord Ragnaro throughout six dungeons from Deathwing's era in World of Warcraft.

What's the Firelands? It is the molten domain forged by the titans to house Ragnaros and his wayward minions. Upon arrival, your task is to help Ragnaros defend the Firelands from Azeroth's champions. 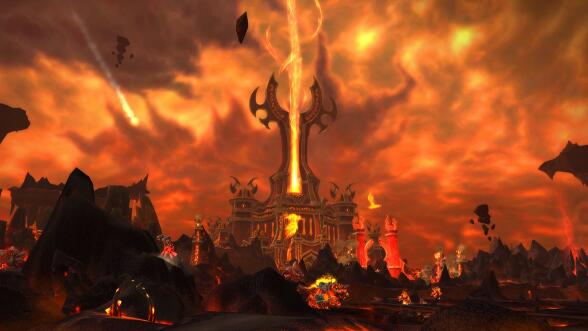 The Firelands raid is only available for the players above level 86 to participate, and the difficulty is like any other normal level raid in World of Warcraft. Here, you'll encounter eight bosses and defeat them for rewards, they are respectively Beth'tilac, Lord Rhyolith, Alysrazor, Shannox, Baleroc, the Gatekeeper, Majordomo Staghelm, Ragnaros.

This raid is not a solo experience, so you can invite no more than 30 players to build a group and step into the molten domain of Ragnaros.

As mentioned above, there are six dungeons from Deathwing's era to complete quests.

Grim Batol
It was once the stronghold of the Wildhammer dwarves, and later seized by orcs as a prison for Alexstrasza by now. Grim Batol looks very cold and humble, but it actually contains many dangers in the Twilight Highlands.

The Stonecore
Within the Temple of Earth, the Twilight's Hammer toiled over Deathwing, trying to hold the Dragon Aspect’s body. And with his renewal complete, Deathwing ascended into Azeroth, shattering the World Pillar and destabilizing the region of Deepholm.

Lost City of the Tol'vir
The city is full of the Tol'vir, who swore fealty to Deathwing in exchange for a cure to the curse of flesh. But they rebelled against the benefactor with the affliction expunged, although they remain irrevocably twisted and hostile due to the dark pact they made.

The Vortex Pinnacle
It is the most beautiful and richest of these six dungeons, but behind its beauty, the pinnacle harbors Neferset tol'vir as well as Al'Akir the Windlord's merciless elemental legions.

Throne of the Tides
It is deep within the Abyssal Maw's fathomless expanses lies the Throne of the Tides. Here, the Tidehunter was threatened the force of serpentine naga and malefic faceless ones, causing his realm and its secrets rip for the plundering.

End Time
Nozdormu has identified a powerful outcomes, it prevents the access to the past, and hope of retrieving the Demon Soul. The powerful creature from out of time lives alone amidst the time-twisted echoes of the past.

You are expected to play well in the Firelands Raid, and the best option is to buy WOW Gold, which could do almost everything from controlling the process to mitigating damage.

MMOWTS is a site for selling in-game currency and equipment, especially WOW series products, such as popular WOW Classic Gold this year.

It has professional service and a good reputation, countless buyers have obtained goods from the site and give a high evaluation. And it can be guaranteed that all goods come from legal channels so that you can find solutions in endless farming.