In the next expansion of World of Warcraft, Shadowlands, we will see a selection of afterlives. Anyone who dies can go to any kind of heaven or hell, from a castle full of vampires devils who torture people to get them back in line, to a beautiful forest of restoration and peace. But the weirdest afterlife is Maldaxxus, which serves as the military task force in Shadowlands. The whole zone is grim, gritty, dedicated to the glorious combat. 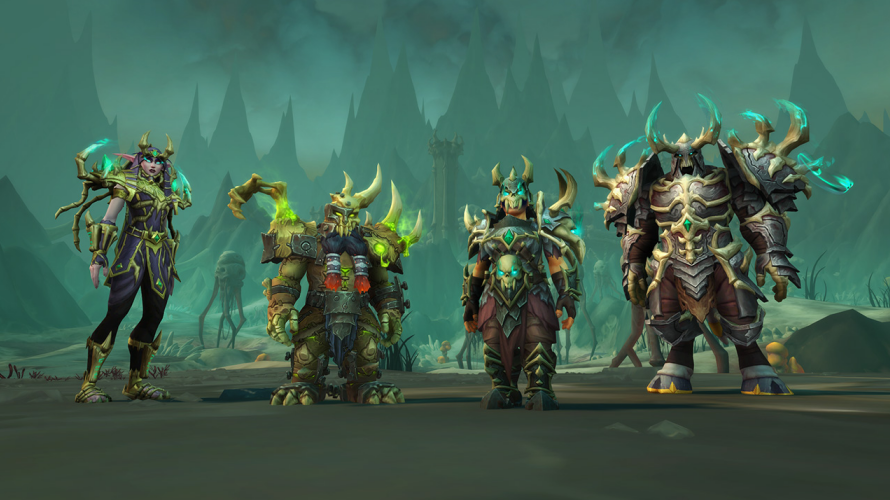 Maldraxxus has the Nercrolords Covenant, as well as some familiar characters - such as Thrall's mom, Draka. There are several central pillars that make Necrolords unique.

One, unlike the Kyrian in Bastion, they don't expect you to erase your memories of being mortal - instead, they think you were such a great, kickass person that they want you to embrace that and improve upon yourself. Maldraxxus is a place for those who are always on that grind, except here, that effort is rewarded by getting to choose your own physical form (like a giant 12-foot-tall ripped skeleton, if you're lucky).

The second thing that makes Maldraxxus unique is that it's essentially a job. The Necrolords serve as the military agents of the Shadowlands, and that doesn't usually mean they fight the other Covenants. In the "Afterlives: Maldraxxus" short, we see Draka infiltrate a Burning Legion world in order to steal a map.

Maldraxxus is ruled by someone called the Primus, who was part of the "Pantheon of Death" that ruled over the Shadowlands. He may be the most tactical, the most long-thinking of the Eternal Ones. So, when it came time to muster a defense force for the Shadowlands, the Primus decided the answer was a system that would eternally separate wheat from chaff in a giant series of melees and battles.

But the Primus is missing in action, and that friendly struggle between the Houses of Maldraxxus has turned into an outright slaughter. People are killing their rivals, undermining their allies, and panicking about the animal draught that's affecting all of the Shadowlands.

The player will have to join forces with the Necrolords on a temporary basis, or as part of their Covenant. If players join the Necrolords, they'll also get a suite of powerful abilities and cosmetics.

So WOW fans will be able to experience Shadowlands soon, but at the same time, you will need to fully prepared for greater challenges. I believe everyone is aware of the importance of WOW Gold in the entire WOW. You can do almost everything with WOW Gold, from controlling the process to mitigating damage. But it'll waste much time when you completing quests, farming or killing enemies to earn WOW Gold.

In order to ensure a good gaming experience for players and save you a lot of unnecessary time, MMOWTS provides cheap WOW Gold, and all WOW Gold sold on this site is safe and legal, and there are different payment and delivery methods for you to choose from, completely avoiding the risk of your account being banned.

Tags:
Next : World Of Warcraft Sahdowlands - What Level Will My Character Be After The Squish?
Previous : ACNH: How To Catch A Soft-Shelled Turtle And Snapping Turtle
Recommended Article
How to run an ESO account for beginners?
Blizzard Polls Classic Players Decide how Burning Crusade Returns
Fallout 76 Wastelanders Update With NPC Was Delayed Until 2020
You Can Reserve Your Character Name Of Wow Classic From August 12
World Of Warcraft Classic Beginner Guidance
WoW Shadowlands expansion: Level cap will return to 60