Few characters have such a unique and strange background as Faruzan, a bow-wielding Anemo character in Genshin Impact. At some point in the past, Faruzan went missing and was exposed to leftover bits of King Deshret's power, which makes her live in the past. She's also a member of the Haravatat Darshan in the Sumeru Akademiya, which studies linguistics, semiotics, and runes. Those who have added this character to their unit list may want to add her to their teams. Her Anemo powers allow for some powerful Swirl reactions, and being a bow user makes her great at ranged attacks. To power her up and maximize her potential, here are all of the materials needed for Faruzan's ascension and talent upgrades.

Leveling Materials
No matter which character is being leveled up, they'll need the same amount of EXP and Mora, including Faruzan. Here's how much in total: 8,362,650 EXP and 1,673,400 Mora, make sure you have that much if you want to pull her.

Gemstones - Where to Find Vayuda Turquoise
This gorgeous gemstone is used by every Anemo character in the game, and they'll each need quite a bit of it.

In short, though, the major sources are daily commissions and fighting bosses. The following bosses can drop Vayuda Turquoise when defeated:

Local Specialty - Where to Find Henna Berries
While over in the desert, watch for red fruits that grow atop cacti. These are Henna Berries (formerly called Redcrest) and they are the local specialty Faruzan's ascension requires. They're pretty much found anywhere in the desert, but they grow in high concentrations around Dar al-Shifa. Unfortunately, as of the time of writing, there are no shops or vendors that sell this red fruit, and it cannot be grown in the Serenitea Pot.

Faruzan has three talents that can be upgraded, which will require the proper materials. This table outlines the materials needed at each level, as well as the totals for both one talent and all three at the bottom: 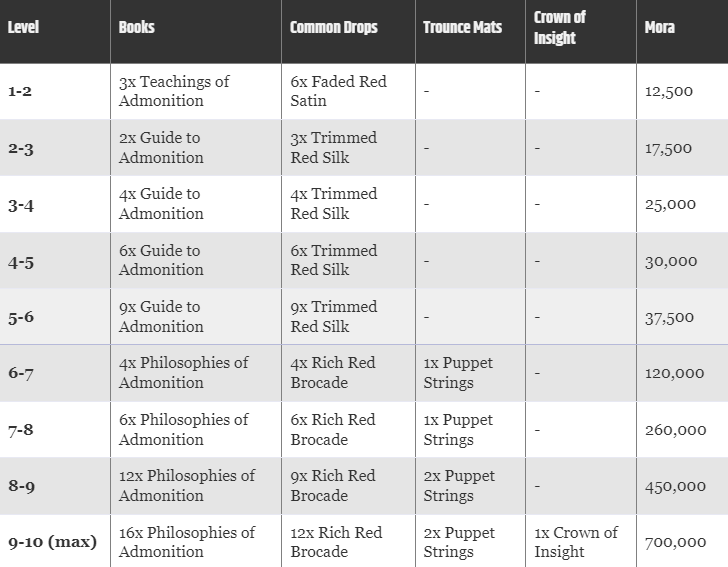 Talent Books - Admonition
The Admonition series is one of three talent book series in Sumeru. Faruzan uses this series, which can be farmed at the Steeple of Ignorance domain on Monday, Thursday, or Sunday.

Trounce Materials - Puppet Strings
It's fitting that Faruzan requires a trounce material from Scaramouche's boss fight, as she released alongside him originally. The Joururi Workshop is the trounce domain where Scaramouche is fought, and Puppet Strings are one of his three unique drops.

Few characters have ever been (or ever will be) as popular as the Wanderer. This Anemo catalyst user is known by many names: The Wanderer, Balladeer, Kunikuzushi, Scaramouche, and more. A member of the Fatui Harbingers and a god's manufactured puppet, Wanderer was finally released during the Sumeru arc after years of fans begging for him to be playable. With how popular this character is, many will be looking to ascend him and make the most of his talents. This guide will outline everything needed to unlock higher levels through ascension and to upgrade his three talents.

Wanderer Ascension Items
Many thought Scaramouche would become a playable Electro character, but he actually has an Anemo Vision. As such, he'll need some Vayuda Turquoise to ascend. He'll also need, interestingly, items from both Inazuma and Sumeru.

Gemstones: Where to Find Vayuda Turquoise
There are quite a few places to find each of the elemental ascension gems, including Vayuda Turquoise. The most reliable method, though, is by farming the bosses who can drop it, which include the following:

Enemy Drop: Where to Find Handguards
Even though the Wanderer is considered a Sumeru character, players will need to venture back to his homeland, Inazuma, for some of his ascension materials. This is because his enemy drop, Handguards, cannot be obtained in Sumeru. The enemies that drop them call Inazuma home as well. These enemies are the Nobushi and the Kairagi, rogue samurai found around the Inazuman archipelago.

These samurai can be found in great numbers around Yashiori Island, though they tend to be found almost anywhere in Inazuma. Other spots where many of them are found include Tsurumi Island and the Kujou Encampment on Kannazuka. Enemies must be certain levels to drop higher-quality items. The same is true for Nobushi and Kairagi.

*At any level, they can drop Old Handguards

*At level 40 and higher, they can drop Kageuchi Handguards

*At level 60 and higher, they can drop Famed Handguards

Local Specialty: Where to Find Rukkhashava Mushrooms
Those who wanted to ascend Collei upon Sumeru's initial release will know all too well the headache of finding Rukkashava Mushrooms. Unfortunately, the Wanderer uses this local specialty as well. They're found in quite a few places, though they can be hard to find because they're either underground or in trees and under large mushroom caps. Hot spots for Rukkashava Mushrooms include north of Pardis Dhyai, around Mawtiyima Forest, in caves around Devantaka Mountain, and around Apam Woods.

Fortunately, there are two NPCs that sell these mushrooms: Ashpazi in Gandharva Ville and Aramani the Aranara, found tucked into a cave under a rock formation in the dream version of Vanarana. Both of them sell five Rukkashava Mushrooms for 1,000 Mora each, restocking them every three days.

Wanderer Talent Materials
To upgrade the Wanderer's talents, the following materials will be needed. 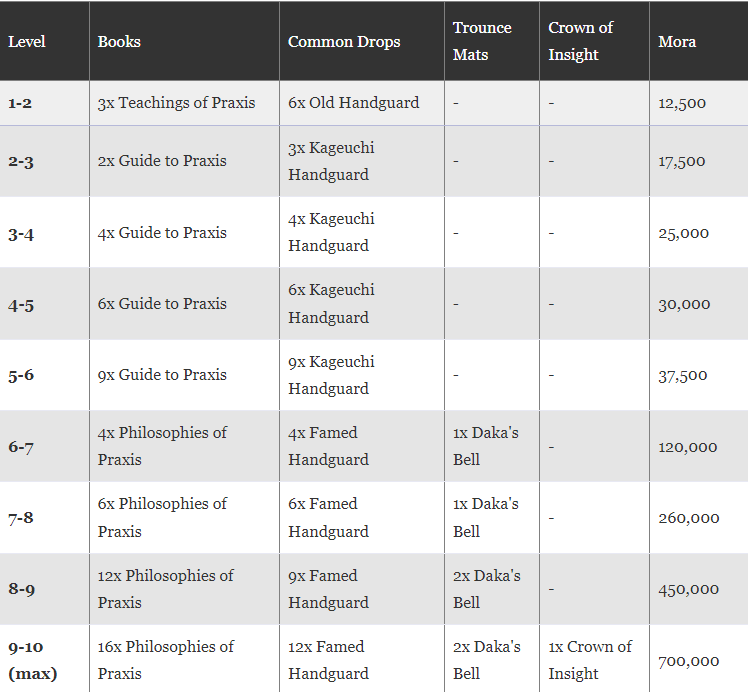 Talent Books: Praxis
There are three talent books in each region, and in Sumeru, one of them is Praxis. This series is the one used by the Wanderer for his talent upgrades. These talent books can be farmed in the Steeple of Ignorance on Wednesday, Saturday, and Sunday.

Trounce Materials: Daka's Bell
It's a bit strange that the Wanderer will use a material from... himself as part of his talent upgrades, but the same is true for Childe, so it seems to be a recurring thing for Fatui Harbingers.

The specific trounce material that the Wanderer uses is Daka's Bell, which is, of course, obtained by defeating Scaramouche's boss fight, technically called Joururi Workshop.

This trounce domain is only available after completing Sumeru Archon Quest Chapter III: Act V - Akasha Pulses, the Kalpa Flame Rises up to the end of the portion titled "Where the Boat of Consciousness Lies."

Next: Three Powerful Builds In POE 3.20 Expansion The Forbidden Sanctum Beginning
Previous: Guides on Blood Death Knight Builds in Wrath of the Lich King Classic
Recommended Article
Elder Scrolls Online Update 37 PTS Patch Notes Highlights What are The Seven Best Ring Anointments in POE How do I earn runes in the Elden Ring? Elden Ring Game Clearance Difficulty Ranking How to Level From 50 to 60 In Wow Classic? basic guide How To Sprint In Elden Ring
Connecting to online customer service,please wait