As Diablo II: Resurrected's first Ladder season runs, players once again experience the classic competitive mechanics and gameplay. As we enter midsummer, the current Ladder has also entered the mid-to-late stage. Since Blizzard did not clearly state the end time of the first season in Patch 2.4, we are still full of unknowns about the length of the Ladder and the opening of the next round of seasons.

As more and more players who are watching or not participating in the whole Ladder have questions about the time of the next round of the season, we can infer the end date of the first season of Ladder and the next season based on the previous Diablo series games. 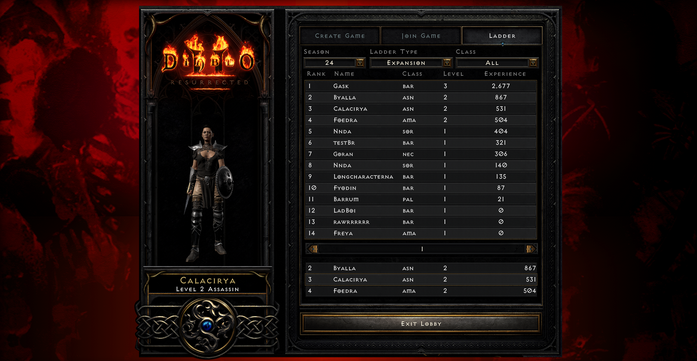 Ladder first appeared in patch 1.10 in the history of Diablo games, nineteen years ago. Players need to create a brand-new character in Ladder, start from level 1 and be able to view their level ranking in the whole system. It is worth noting that Ladder and non-Ladder characters and items cannot interact, and the special D2R Ladder Items that players get can only be saved and used after the Ladder season ends.

According to the past rules of Ladder mode, each season basically lasts six months, but the Ladder mechanism set by Blizzard in Diablo II: Resurrected restarts more frequently, and the designer once suggested adjusting the time of each season to four months.

So it's highly likely that we'll wrap up the currently running Ladder Season 1 around August 25th and see a ranking reset for the four modes. At the same time, we expect Ladder Season 2 in early September, when players can restart the challenging process.

MMOWTS will always keep an eye on you and provide you with the latest news of Diablo II: Resurrected Ladder, you can always visit us and get more high-quality services here.