In WOW CLASSIC, the first non-linear dungeon is the Wailing Caverns, which is very tricky to navigate for new players. Here, it is easy to roam around, and get lost in its winding, intersecting areas.

So, before you and your crew enter this dangerous, it is helpful to read this guide:

Rogues and Mages are good choices for this dungeon because there are a lot of humanoid mobs. Druids are also a good choice, because they can use some abilities to deal out damage to many enemies at once. Shamans can counteract the CC that will be often used by enemies and bosses in the dungeon with their Tremor Totem.

No matter what your class is, the recommended level for the Wailing Caverns is 17-24, but on the lower end of this range, it is quite difficult to get through.

You can find the entrance to this dungeon in the Barrens, to the southwest of the Crossroads.

Starting from the north side of The oasis, you will find a huge rock formation leading to the cave.

Go inside, turn right at the first intersection, then a left, and you will come to a shallow water area.

Walk along the curving tunnel until you enter a huge cavern, full of large plants and a pool of water. Follow the path leading to your right and you come across the dungeon entrance.

Several quests are related to the Wailing Caverns, most of the missions start from outside the dungeon, and one quest is inside.

We recommend that you complete all these quests as much as possible before entering the dungeon.

Serpentbloom - collect 10 Serpentbloom from the dungeon. Given by Apothecary Zamah and requires level 14.

Deviate Eradication - kill 7 Deviate Ravager, Deviate Viper, Deviate Shambler, and Deviate Dreadfang. Picked up above the entrance to the cave and requires level 15.

Deviate Hides - collect 20 Deviate Hides from trash within the instance. Picked up above the entrance to the cave and requires level 13.

Smart Drinks - collect 6 portions of Wailing Essence. Given by Mebok Mizzyrix in Ratchet and requires level 13.

Trouble at the Docks - retrieve the bottle of 99-Year-Old Port from Mad Magglish in the Wailing Caverns. Given by Crane Operator Bigglefuzz in Ratchet and requires level 14.

There is only one quest that starts inside the dungeon and it is available to both factions:

The Glowing Shard – this requires you to find someone in Ratchet that can tell you more about the Glowing Shard. You will need to take the shard to Sputtervalve in Ratchet, then head to Falla Sagewind, who is found on top of the mountain that covers Wailing Caverns. Dropped from Mutanus the Devourer and requires level 15.

The first boss of the dungeon is a level 20 elite humanoid. She can spawn in any of the torch circles at the top of the cavern she is in.

Wipe out the enemies around her before pulling her your way. Be mindful of her Sleep and dispel whenever you can.

The second boss is another level 20 elite humanoid. This boss is pretty straightforward the whole way through. There aren't any unique mechanics you should worry about with this guy.

The first optional boss is neutral unless you choose to attack him. We don't recommend you take him on unless you have a tank shield character.

The third boss of the dungeon is a level 21, you guessed it: elite humanoid.

You will want to look out for the boss casting Healing Touch and interrupt it. Also, avoid his Thunderclap attack if you are a ranged character.

The second optional boss is a level 21 elite beast who will cast Chained Bolt. The attack will deal out AoE damage, but is minor enough that you don't really have to worry about it and just heal through it.

This is the fourth boss of the dungeon and also the last Leader of the Fang. He is a level 21 elite humanoid.

Just like with Anacondra, watch out for his Sleep attack, which needs to be dispelled as soon as possible or removed by a Tremor Totem from a Shaman. 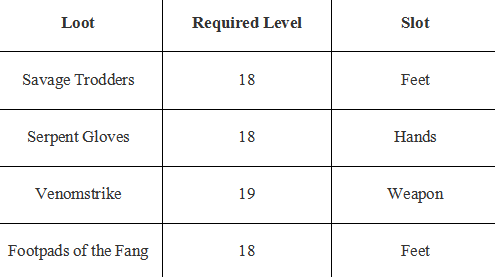 His melee attacks are the main thing to watch out for. They can deal a ton of damage, even to Warriors with tanking shields. He can also do a stomp attack that deals out AoE damage and roots players hit by it. Ranged players need to stay away from these attacks.

The final boss of the dungeon will be triggered when you are trying to wake up Naralex. He is a level 22 elite Murloc.

In addition to the boss, there will be waves of adds that you will have to contend with as you fight. Some players will be hit with a Naralex's Nightmare attach, which will put them to sleep. They need to be attacked to break it. He can also use Thundercrack to hit ranged players.

Tha's all about the Wailing Caverns of WOW Classic. If you are a new player, it will help you get through these quests. For more guides, you can visit MMOWTS.

Also, MMOWTS provides you with cheap WOW Classic Gold at any time, but this is not a long-term solution. If you want to play Classic for a long time, don't forget to follow its rules.