With the updates of Terror Zone in Diablo 2 Resurrected, it may come as no surprise that the Amazon is the best choice for this challenge. As the fastest boss-killing build without any other competitors, she is an absolute and typical glass cannon. 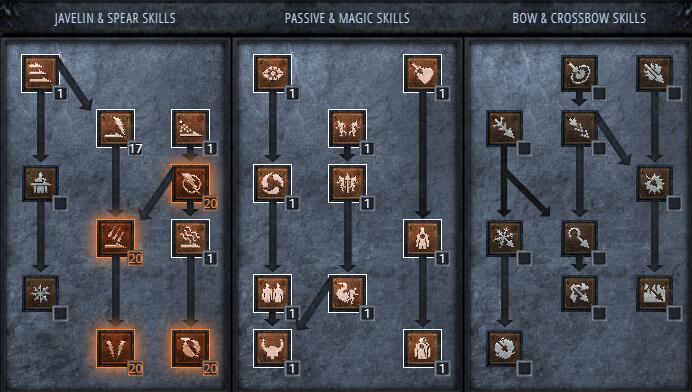 Lightning Fury and Charged Strike as Amazon's key damage skills, make sure you can max them all as much as possible. Charged Strike is the most important single target dps skills on boss killing, while Lightning Fury could be the greatest and most powerful AOE skills with the interaction of Pierce.

Most of her elemental devastation comes in the form of lightning damage, you can also deal the physical damage to some special monsters but this will rarely be required, as your mercenary's conviction aura which could break the immunity of most monsters.

One thing you have to pay much attention, Amazon is extremely relying on mana, thus you have to prepare enough mana potion especially when you get your end game gear, meanwhile your mana sustain will be unbelievable lower than before. Meditation could help your mana recovery, and you can also use Mana Leech to over come it.

About gear, over here is the recommended list of Amazon on Lightning Damage Build.

Regardless, this is the best boss killer in the game. so when any of the end of act areas get terrorized, this build will be well equipped to deal with the any Act Bosses for that reason.

Alone this build is a very solid choice when you try to reach level 99 with or without terror zones. While she may run into problems with unique monsters that are immune to both physical and lightning damage, it's in your best interest to quickly move on from those ones, and find large packs of enemies that can be taken down quickly with Lightning Fury, or you can find weaker unique monsters that can practically be one poked.

Since more inform about the D2R Ladder will updates in MMOWTS.com, this web could be your best assistant. Other than that, you can also find Diablo 2 Resurrected Ladder Items here in cheap price. Do not let it slip, come here to see!